Santa Lucia in Sweden and Sicily

Santa Lucia is celebrated in Sicily and also in Sweden. How is that possible?
Yes, because celebration and life of?Saint Lucia stretches back to the time of the Vikings and the Roman Empire.
?
Saint Lucy, in Italian Santa Lucia is celebrated each year 13th December and is one of the few saints Sweden celebrates, but is one of the most important saints in Sicily and probably the most spread celebration of sicilian saints in the world. She is the patron saint of the city of Syracuse in Sicily. Because of various traditions associating her name with light, she came to be thought of as the patron of sight and was depicted by medieval artists carrying a dish containing her eyes. Santa Lucia is also seen as the protector of Christianity.
?
Lucy came from a wealthy Sicilian family. Spurning marriage and worldly goods she vowed to remain a virgin in the tradition of St. Agatha (the saint of Catania, Sicily). An angry suitor reported her to the local Roman authorities for protecting persecuted christians, who sentenced her to be removed to a brothel and forced into prostitution. Lucy was probably a victim of the wave of persecution of Christians that occurred late in the reign of the Roman emperor Diocletian.?As evidence of her early fame, two churches are known to have been dedicated to her in Britain before the 8th century, at a time when the land was largely pagan. Her death was violent as miraculously unable to move her or burn her, the guards took out her eyes with a fork. In another version, Lucy’s betrothed admired her eyes, so she tore them out and gave them to the pagan?man she refused to marry, saying, “Now let me live to God”.
?
In Sweden, St. Lucia?s Day marks the beginning of the Christmas celebration. Saint Lucy is one of the few saints celebrated by members of the Lutheran Church among the Scandinavian peoples, who take part in Saint Lucy’s Day celebrations that retain many elements of Germanic paganism. Saint Lucy is celebrated also in USA by people with scandinavian heritage with church activities.
?
?
?
? 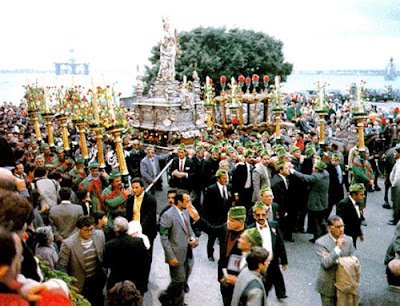 Santa Lucia how it is celebrated in Siracusa, Sicily
?

Sicily Inland – From Nicosia to Agira

Living In Sicily is a registered Trademark